For each period in this web site you’ll find pictures of my works and a small introduction. There is also a page dedicated to some of my sculptures.

They say, and I totally agree, that art is communication. To describe my “journey“ through the oil painting, I like to use the metaphor of a child learning a language.  Starting from when he says his first words until he becomes adult and he makes his first speech. 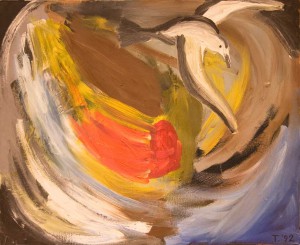 I’ve called this the ”Early period”, because when I see those works it brings me back to the that period of my life.

When you’re really young you can’t speak.  It doesn’t means that you are not able to communicate. It’s only that you do it in a different way. In your mind you want to say things, but they come out in a different form: facial expressions, sounds, laughter and tears.  Those sounds become something similar to words until one day it happens.  You think of something and you make a sound that people actually understand for what it is:  your first word.

In this period I used a lot of colors a lot of movement and an incredible quantity of brush work but I can see almost nothing of what I really had in mind.

Within the painting of this period, there is one which pops out like it was made by a different person; this painting its call “Lo sfogo” which in Italian means “vent out”.  I remember it very clearly.   In that painting, out came all the frustration on not being able to paint what I wanted.  So one day I took colors and a brush and I just start playing with them on the canvas, and at the end I did it.  Many people like it very much, perhaps because like the crying of a kid it has something to say.

At the end my first word came out, was the painting called “Cruccio per l’impossibile” which in Italian means more or less “troubled for the impossible”.

I think we say that, this period’s painting style is mainly abstract, even if in some of them there is a vague attempt of the figurative or metaphysics.

The first word has been told, so now also the second and the third. The talking isn’t a problem anymore, and the attention now starts to moves more on to what to say.  The dictionary is limited and it is not always easy to find the way to express myself, but the feeling was good and some small satisfactions start to arrive; for example when they offered me to buy my painting “The pawn”.

Unfortunately I lost contact with many works of this period and I couldn’t get their pictures, but it’s easy to see that chess and dolphins are the predominant theme.  A lot of colors and time after time some new elements make their own appearance.

It’s easy to say that the dominant style of these works is surrealism metaphysic, even if in a few painting, like “Marine” there is an attempt of “pure” figurative.

My personal life started to be very busy, and without notice it, in 1994 it happened that I had stopped all my artistic activities. 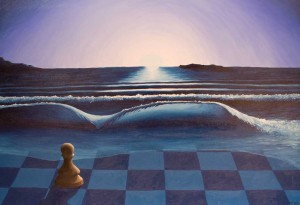 It had been more than eight years; all the activities I use to do were almost over.  I was a full time employee and even if I was still practicing almost every day, I started feeling like something from my past I was missing.  One day I took colors and a brush out of the closet and I restarted.

It was clear that something was changed; colors almost disappeared to leave room to the light, reflection and transparency.

I felt like my communication skills were grooving, but I was still playing around with my limited dictionary and grammar.

I think this is a very humdrum period.  Even if executed in a different way, the only style is still surrealism metaphysics. The subject except for the painting “the journey” is always the same, the sea, the beach, and the light. 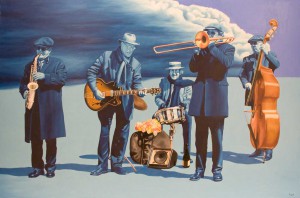 Looking back to the works I made, I realized that there was still something missing.  I started analyzing pictures and other art works, and finally I understood that it was impossible, for me, to reach the level I always wanted without having a model front of me.

So I started to use pictures as models thinking that I could finally start painting in the way I always wanted. I was wrong, to know how to mix oil color and how to use brushes wasn’t enough. I had to face immediately the problem that my drawing skill, good for what I did in the past, wasn’t enough for what I was willing to do.

To try to increase my skills on I started trying the same drawing technique they thought at school, using a pencil and thumb as a reference.  A large canvas isn’t an A4 paper sheet and making sketches on it wasn’t that easy.

I was thinking at how to solve this problem when I remembered, that hundreds of year ago, very good painters (Canaletto Vermeer and many others) used to help them self with some optical device.

I studied my own system to make preliminary sketches on large size canvas and since then a new course has started.

To go back to the language learning metaphor, I would say that this is the period where I’ve build up dictionary and grammar. From now on I should think less on how to say something and have more focus on what to say.

The style moves to a direction of something new for me; a mix of pure figurative and metaphysical executed in a completely different way. 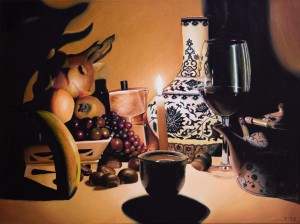 I still have many things to improve but I’m finally seeing what I have always wished in my works.

Someone once said: it is better to shut your mouth, and let other people think that you are stupid than to open it and remove all the doubts.  From now on the most difficult part will be to find the right idea;  a subject worth talking about, and trying to make a clever ”speech” about it.

In this period, the predominant style is the “pure” figurative, but in alternative also appeared a new style based on an idea.  A style which inside my artistic course represents the evolution of the “traditional” metaphysics surrealism, based on a representation quality typical of the drawing.  This is the base of many works of mine of the initial period and the first monochromatic period.

The idea is to try to make a photograph of an idea, in a metaphysics surrealism much more detailed, in which trying to reach a representation of quality, similar to photography; with such quantity and the quality of the details, to give the sensation to be in front of a photograph.  In the same time, let the human execution transpire.

To distinguish the works made in this new style from the one made in “traditional” metaphysics, from now on I’ll call this style “Neo-Metaphysic”.

By continuing to use the site, you agree to the use of cookies. more information